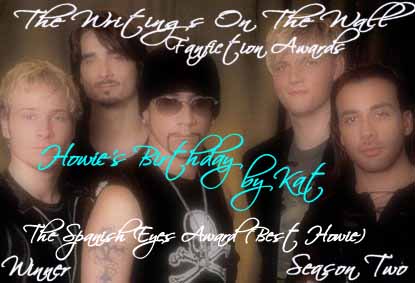 He woke slowly. Hovering in that gray area between sleep and wake, his mind taking on several quick trips of fancy before bringing him back to reality. He stretched first, long arms pulling against the air, his neck twisting, straightening, and his legs kicking at the covers. Finally he let his eyelids slide open to reveal his milk chocolate dark eyes.

The sun streamed in, slightly diffused by the off-white sheer curtains that were flowing in the subtle breeze from coming in from the open windows. He could hear the call of the seagulls, and the answering crash of waves.

All in all, it looked and sounded like a great day.

But not for him.

It was his birthday.

Not that there was anything wrong with that really. It’s just that things always seemed to go wrong on his birthday. Some years it was little things: a flat tire, a missed appointment, or a spill on his new shirt. Other years it was much worse: broken relationships, fights with the record company that ruled his life or major illnesses.

It may not be his birthday that caused all that; it may just be that he is in a heightened state of attention because it is his birthday. Whatever the cause, all he really wanted to do was hide under the covers and pretend the day wasn’t happening.

But he couldn’t do that.

Not only would his family never let him forget, his “job” made it impossible. Being a member of the most popular group on the planet meant that even if he wanted to forget, millions of fans didn’t. They wanted to see him happy-go-lucky and celebrating. He loved his fans, really he did. He just wished that they would leave him alone on this day. Let him suffer in peace.

“What a grump,” he muttered to himself as he got up. “Old age is getting to me.”

He looked at himself in the mirror. Didn’t feel any older. No sudden wrinkles. Hair was still its usual mass of twisted curls. No receding hairline. Was that a gray hair?! No, it was just the light. Phew. Body was still its well-kept self. Sure, his abs were a little slacker now because he’d been enjoying Mama’s cooking and not constantly performing. It would tighten up fast once the next tour started. He wasn’t worried: he’d done is push-ups and sit-ups last night, as always. And he was heading over to the gym later.

The phone rang: a discordant rattle. He picked it up and was immediately greeted by an x-rated rendition of the happy birthday song.

He chuckled. “A little to the left.”

“Yuck! Too much information. Man, you never answer that one honestly, why you starting now?”

“You know us old-timers. No need to be shy anymore.”

AJ snorted. “So I‘ll see you later at the party? I have this way cool present to give you.”

“Just remember my Mom is going to be there. Nothing too outrageous, okay?” Howie warned.

“Would I do that to you?” AJ cackled then hung up.

Other than the bird poop that landed directly in his sightline as he was driving to the gym, the day had been uneventful. He had smiled amiably through all the birthday wishes (phoned in or otherwise), waving at the few fans who had managed to crack his daily schedule code and had lain in wait for him at various points along his route. He’d had to wait a while to get on some of the weight machines, but that was nothing to be nervous about: it always got busier in the gym a few weeks before September started. It was an exclusive gym, but everyone suddenly seemed to remember that they had been lax over the summer and needed to look tighter and firmer for the Fall rush, whether it was at the office or university or wherever.

The long shower had made him feel better. Though he had dropped the soap. He’d giggled a little at the idea, and then bent over provocatively to pick it up. Fortunately he was in an enclosed shower and all alone. Still, it felt good snubbing his nose at the belief.

He glanced at his watch and swore. He was late. Damn. He still had to get back to the house and grab a few things before he headed over to the restaurant where he would be subjected to the indignity of his birthday party. He hopped into his Corvette, revved the engine and peeled out of the parking lot.

And came so close to hitting a woman cycling by that his sudden swerve away unnerved her and she fell off the bike.

“What the fuck do you think you are doing?” She wore at him as she got up, dusting herself off.

“I’m sorry. I didn’t see you,” he explained as he hopped out of his car, wide-eyed at his near miss.

She seemed similarly shaken. He could tell by the way her hands shook as she tried to right her bike. But shock usually presents itself with aggression, once the scare is over. “What? The reflective suit not bright enough for you?” she asked snidely. She finally got her bike upright, then realized that her jacket was torn and her elbows bloody. “Oh great. Just great. I just bought that.”

She loosened her helmet, shaking out her long auburn hair. She wiped a hand across her face, leaving a small track of dusty blood from the cut on her hand. “Just peachy. Can’t you tell? Christ, what is it with little men and their goddamned muscle cars? Penis not big enough so they have to drive one?”

Howie had heard more than enough jokes about his height recently and was not in the mood for more. It was his birthday, dammit. People should be nice to him.

“There is nothing wrong with my penis. I just happen to like the car. You always such a bitch?” he shot back.

“Only when I almost get killed by some idiot with more money than sense.”

“What the hell’s that supposed to mean?”

She pointed to her bike and then to his car. “Hello? Me: riding a bike because it’s all I can afford right now. You: driving some souped-up sports car. I may not be brilliant when it comes to cars, but I know that those ones cost a pretty penny.” She finally finished cataloguing her assortment of cuts and bruises and looked up at him. “Oh shit!” she whispered as recognition spread across her face.

Great. Just what he needed. A fan.

“You have some…” he pointed at her chin. She wiped quickly at it, swearing softly when she say the streak of dried blood. “I really am sorry. I admit I wasn’t looking. And I didn’t actually hit you. Just swerved too close.”

“True,” she replied a little more evenly. “It could have been worse. Happy birthday, by the way.”

Yeah, turning into a real happy one. Yet again. “Thanks,” he replied brusquely, eager to be on his way. “Is there any way I can apologize? An autograph or something?”

She looked at him, taking in his anxious demeanor. And was suddenly angry all over again. “No, I do not want an autograph. What I want is for you to really be sorry for almost killing me. I want you to be gracious when someone wishes you happy birthday. I want you to be a little less self-involved. And I want you to keep trying to be those things until you get it right.” She slapped her helmet back on, climbed on her bike and started cycling away.

“Bitch,” he muttered angrily. He glanced down at his watch seeing that this incident had cost him valuable time, and climbed back into his car. He started the engine, glancing carefully for any obstacles this time, then headed off. But not before give that woman the finger as he drove past her.

The rest of the day when pretty much according to plan. The party was nice; everyone there more to see and be seen than to be around him. AJ embarrassed him in public again. Same as every year. Only this time, Nick got in on the game, and Howie wasn’t sure if his mother was ever going to stop blushing. Jesus, couldn’t they wait until later in the evening, after Mama had left to go home before they pulled those stupid stunts? He never embarrassed them like that in public. Okay, so a few times, but not like that.

It was late, very late when he finally got to bed. His birthday was thankfully over, he thought as he staggered drunkenly to his lonely bed. And tomorrow would just be another day.

He woke slowly. Hovering in that gray area between sleep and wake, his mind taking on several quick trips of fancy before bringing him back to reality. He stretched first, long arms pulling against the air, his neck twisting, straightening, and his legs kicking at the covers. Finally he let his eyelids slide open to reveal his milk chocolate dark eyes.

The sun streamed in, slightly diffused by the off-white sheer curtains that were flowing in the subtle breeze from coming in from the open windows. He could hear the call of the seagulls, and the answering crash of waves.

All in all, it looked and sounded like a great day.

But not for him.

It was his birthday. Again.