Whitney is one of the BEST writers on the net. Her current tale "The Legend" will garner her sci-fi fans from all walks - but we'll have the inside scoop on her main characters who, oddly enough, have very similar names to the Backstreet Boys and N'Sync. Go figure! LOL

All you need to know for this brief yarn, though, are two things. #1, Whits LOVES Brian Littrell, and #2 she HATES raw vegetables. 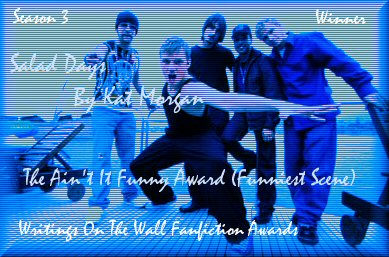 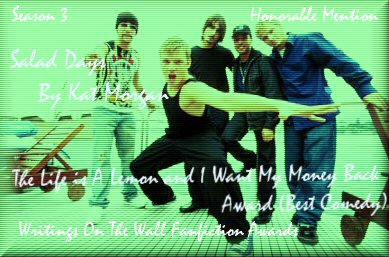 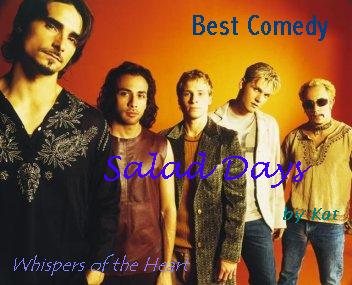 No response. Just a small snoring sound. Part of her was glad of that ľ the LOUD snoring sound had been really annoying. Her ears had rung for hours after the time heĺd rolled over and launched a particularly loud snort right into her ear. Little jerk hadnĺt even woken up when sheĺd shrieked and jumped out of bed thinking that the roof had caved in. Heĺd just let out another one of those horrible noises and pulled the covers sheĺd just vacated over himself.

But this time she really did want him to wake up! She said his name again ľ louder this time and nudged him. Still no response.

If they were murdered in their sleep he was soooo dead.

On one level her mind was laughing uproariously at the sheer stupidity of that thought. The other was really starting to panic. What the hell was it going to take to wake the fool up? Oh sure, she knew of one way that was always effective, but this was hardly the time or place for that. Well, it was the placeů but not the time.

What was that?! Her head swiveled sharply towards the doorů It was that sound again. Now she knew she hadnĺt been dreaming. Someone or something was in the house! And she couldnĺt get her oh-so-mighty protector to wake up.

She pinched his nose shut, trying hard not to get her fingers caught in the vastness of his nostrils, and elbowed him hard at the same time as she shrieked his name directly into his ear. It took a few moments but he finally started to react. His blue eyes opened slowly and a slow grin spread across his face as he saw her leaning over him, discreetly wiping her fingers on the corner of his pillow.

He listened for a moment then muttered, ôI donĺt hear anything,ö and snuggled back into the covers. The sound came again and he shot up in the bed.

ôI take it you heard it that time?ö she asked sarcastically as she nervously gazed at the door.

He climbed out of bed and pulled on his briefs ľ backwards ľ show her the occasional shot of his pasty butt as he slowly moved towards the door. He opened it timidly, then jumped when she whispered ôbe careful.ö Swearing under his breath he put a hand over his heart trying to still its sudden pounding, then reached for the Louisville Slugger leaning against the wall.

With the bat firmly in hand he crept down the stairs, then flicked the hallway lights on. It took his eyes a second to adjust and he blinked, then called out, ôwhoĺs there?ö

ôBrian?ö the sound of the voice made him jump and he turned to see Whitney looking down from the top of the stairs. She was wearing his Kentucky Wildcats t-shirt and holding a riding crop in her hand. Damn she looked sexyů and the thought of what she could do with that crop flashed across his mind before he realized why he was downstairs in the middle of the night.

ôBaby, you go back into the room. Stay there until I say itĺs safe,ö he ordered and she nodded mutely then turned and returned their bedroom.

He crept into the living room. No sign of anything amiss. Same with the den. But in the kitchen ů

Whitney heard a loud shout and then a series of thumping noises. Then silence. She climbed back out of the bed and picked up the riding crop again. ôBrian?ö she called from the top of the stairs.

ôStay back! Iĺve got it under control!ö he replied. Then another series of bangs ľ and something that sounded like the food processor going ľ then a screech of pain.

She sped down the stairs, crop raised, and surged into the kitchen. Then stood in shock at the scene before her.

All the furniture in the room was thrown all over and dark red wet marks dripped down the walls. The drawer with all the cutlery was open and its contents thrown on the floor. The refrigerator door had been blown off its hinges and the carton of milk tipped over and was pouring its contents over the linoleum.

Radishes rolled freely over the floor, only hesitating when they came in contact with the wilted lettuce leaves that were strewn everywhere. Brian stood in the middles, fending off the attack of several airborne celery stalks. A tomato launched itself at his head and he swung the bat hard, splattering seeds and pulp as the fruit ľ yes, fruit not vegetable ľ hit the side wall and slid down to the ground to join its previously pulped brethren.

A soaring potato got under Brianĺs guard and hit him in the solar plexus, knocking the wind out of him. He doubled over with a painful groan, then stumbled over a radish and went down.

Whitney screamed in horror, then dove, brushing aside an aloft avocado, to reach his side.

She shook her head. ôNot without you,ö she replied as she used her crop on an overeager cucumber that was sneaking up on her left.

Suddenly his body jerked, his arms flinging back spasmodically. He let out a sickening bellow, then fell forward into her arms. Looking up into her eyes, he whispered, ôI love you.ö He wheezed deeply once. Then not again.

Whitney shook him, calling his name, then her gaze fell on the rivulets of blood running down his back. A carrot had speared him, dead center, through the heart.

Gasping horribly, Whits sat up in her bed. Her sheets were twisted around her and sweat stains showed clearly on their thin cotton.

ôYou okay, hun? You were having a nightmare,ö her room mate Bianca asked.

Whitney gulped several times, then nodded her head. ôIĺm okay. It was just a nightmare. A horrible nightmare.ö

ôMust have been. You were kicking up quite a storm. Want to talk about it? Iĺm awake now. Donĺt think Iĺll be getting back to sleep anytime soon.ö

ôĺk. Well, then I am going to get something to eat. I think there is some of that salad left overů.ö

ôNO!ö Whitney jumped in front of the doorway. ôWhatever you do, swear to me that you wonĺt touch that salad!ö

Whitney sighed heavily. ôThanks, Bi. Ice cream is good. No vegetables in ice cream. Just have ice cream. Or chicken. Chicken is good too. With BBQ sauce. Just no vegetables.ö

Bianca looked at her strangely. ôYou know. Sometimes you are just plain stange. Youĺd think that vegetables are evil or something.ö

Back to Main Page